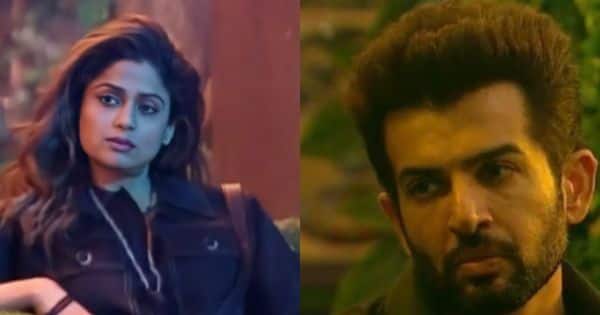 Bigg Boss 15 saw a huge twist tonight. Now, everyone is inside the main house. The jungle recreated outside the main house will be demolished. We will get back to the original Bigg Boss now. And now there is no prize money for the winners. Yes, this is indeed shocking. Jay Bhanushali, Miesha Iyer, Ieshaan Sehgaal, Pratik Sehajpal, Simba Nagpal and Akasa Singh were told to choose between an entry inside the main sacrificing Rs 25 lakh or exit the show. Jay Bhanushali and everyone agreed that they would rather go inside. Everyone is being paid on a weekly basis but the money does matter. Also Read – Bigg Boss 15: Fans laud Tejasswi Prakash for speaking up against Vishal Kotian’s dirty humour — read tweets

Shamita Shetty was damn upset with Jay Bhanushali. She said that he tried to take the moral high ground yesterday when he said he would not like to compromise with the money, but agreed instantly as this affected him. She said if he had agreed on the task and done it, atleast Rs 25 lakh would have been safe for the winner. Jay Bhanushali said he took the decision seeing the existing situation on the show. He said he did not wish to ruin the chances of six people so this makes sense. Fans are also trolling Jay Bhanushali saying that perhaps the thought his minimum guarantee would work but Bigg Boss played a different game. As we know, top contestants are rumoured to have signed a MG that guarantees a fixed period of time on the show. It is something that is often discussed on social media. Also Read – Bigg Boss 15, Day 20, Live Updates: Tejasswi complains about Vishal Kotian’s dirty sense of humour

Bigg Boss 15: Verdict’s Out! Fans feel that Nishant Bhat is biased towards Pratik Sehjapal and his friends — view poll results

There is an immense buzz around Rohit Shetty’s Khatron Ke Khiladi 12 as some of the biggest names from the TV industry are part of it. From Rubina Dilaik, Jannat Zubair, to Faisal Shaikh – many stars have flown off to Cape Town to be a part of the show. As the cameras have started […]

Ace comedian and actor Sunil Grover was recently admitted to Mumbai’s Asian Heart Institute after he suffered a minor heart attack. He has now been discharged from the hospital after a successful bypass surgery. As reported by ANI, the doctor revealed that Sunil was also found Covid-19 positive when he was brought to the hospital […]